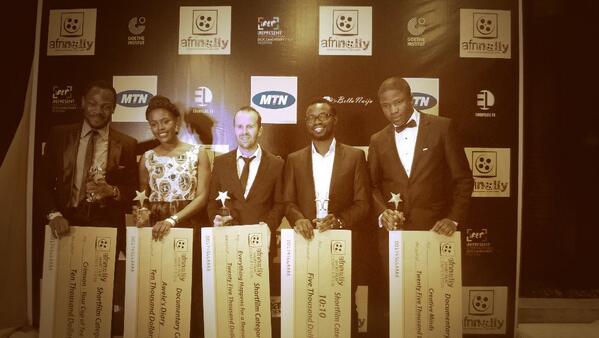 Winners posing with their cheques

Outstanding filmmakers in the 2nd edition of the just concluded MTN Afrinolly Short Film Competition were honoured in an intimate awards ceremony which took place at the MUSON Centre, Lagos. The event which kicked off with picture taking session on the yellow carpet attracted industry heavy weights such as Tunde Kelani and Femi Odugbemi. Organiser of the event, Chidi Maduegbuna said the night was to celebrate the best of Africa’s filmmakers and provide an opportunity for networking. Head Judge, Femi Odugbemi in his remarks said, “This year’s edition received films and documentaries of a high quality.”  A moment of silence was held in memory of the late Komla Dumor who was a member of the judging panel before his untimely demise. In between musical performances from the band, all the finalists were honoured and presented with cash prizes. In addition, new awards in cinematography, performance, storytelling, animation and picture were also presented. Receiving the award for the best short film, Florian Schott told Nolly Silver Screen that Afrinolly gives people the opportunity to watch African films. He added that the platform served as an avenue for African filmmakers to distribute their content.

The Komla Dumor Award for Storytelling: Crimson – Your Cup of Tea by Daniel Etim Effiong